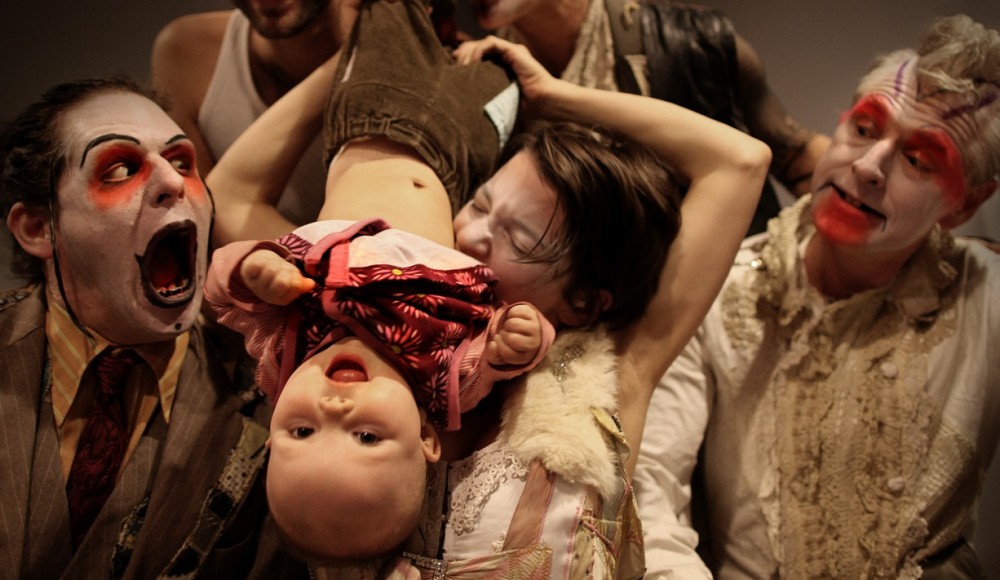 Many children dream of running off and joining the circus, but only a few brave souls pursue fire eating and tightrope walking as adults. Sleepytime Gorilla Museum has done something even wilder: it has invented its own freak show, something more bizarre and beautiful than any clown-filled big-top.

The fearless five-piece performs one musical stunt after another, bleeding into performance-art territory as it carves genres such as metal, prog, and avant rock into strange new shapes. But this is no novelty act: the group has some substantial — even shocking — things to say about the nature of human life and 21st Century culture.

Most recently, Sleepytime has explored the theme of human extinction, which it began to dissect on its 2004 LP, Of Natural History. Described as a debate between Unabomber Ted Kaczynski and Filippo Tommaso Marinetti, founder of the Futurist movement, the album seems to boil down to a central question, phrased as a song title: “What shall we do without us?” This question leads to another too: “What might those last days be like?”

“I realized pretty quickly that one of the most direct ways to have a unique, original sound is to play instruments no one else is playing.”

The group’s Fall 2005 tour provided a few answers via Shinichi Iova-Koga, a movement artist who specializes in Butoh, an avant-garde dance form that grew out of student riots and cultural taboos in 1950s Japan. After hanging beneath a sheet, upside down, for the first half of each Sleepytime show, he would emerge as “The Last Human Being,” painted head to toe in white, writhing like a demon-possessed corpse as his shadows danced upon the wall.

These days, the band — clad in tattered tutus, bad-ass boots, and braids — provides a soundtrack for these eerie encounters whether or not Iova-Koga is part of the act. But to take a closer look at this theme of extinction, Sleepytime will soon release a short film called The Last Human Being that explores Iova-Koga’s character while presenting a few new songs.

“During the [2005 tour], we would talk about the human being and what had happened to them, how they used to be all over the place,” says Nils Frykdahl, Sleepytime’s guitar- and flute-playing vocalist. “The film takes that idea even further. It looks like that 1970s TV show In Search of… where Leonard Nimoy was the host and would ‘investigate’ something. We have actors playing a panel of scientists on a talk show. The human is the mysterious creature being ‘investigated.’ It’s fairly comic at its roots.”

Frykdahl says that the film and its music were also inspired, in part, by the story of Ishi, the last of California’s indigenous Yana people. After crossing paths with a group of cattle butchers in 1911, Ishi was quickly put on display at the University of California-Berkeley’s Museum of Anthropology. Though Ishi helped scholars learn about his tribe’s rapidly dying customs and language, he also functioned much like a circus attraction, entertaining guests by making crafts and arrowheads.

“He’s this touching, tragic character,” Frykdahl says. “His life went from a tribal world that was decimated, where he’d seen only a few dozen humans in his entire life and survived, in isolation, in very rough terrain, to suddenly being exposed to Ocean Beach, with thousands of people. He probably stood there with his mouth open, shocked that there were so many human beings in the world.”

Sleepytime taps into this sense of wonder mixed with horror in many of its songs, especially newer offerings like “Salamander.” A mix of apocalyptic sonics — machine-gun drumming, theatrical vocals, commanding rhythms, and loads of distortion — illustrates the struggle to survive in a hostile environment while the band’s absurdist humor seems to mirror the cosmos, laughing at each tiny creature’s fragile existence.

A few tracks from past albums may find their way onto the film’s soundtrack as well. One possibility is “Phthisis,” a song from Of Natural History that imbues Sleepytime’s live act with the essence of an ancient death rite. Beginning with a dose of wailing vocals and metaphorical lyrics from violinist Carla Kihlstedt, the song descends into a primordial ooze of passionate melodies and precise, pounding rhythms. And it’s one of the group’s more straightforward compositions.

Another contender is “The Greenless Wreath,” from the band’s 2007 release, In Glorious Times. Frykdahl’s voice scrapes and scratches like Tom Waits‘ as custom-made instruments create a jungle of futuristic sounds. Built by bassist Dan Rathbun, these instruments create a new lexicon of sounds with which the band can communicate its vision. (Examples include the Pedal-Action Wiggler, a pedal-powered version of the Brazilian berimbau, and the Electric Pancreas, a set of thin metal slices that make a crunching sound when whacked with a stick.)

Then there’s a metal spring, inspired by the one that Einstürzende Neubauten plays in “Selbstportrait mit Kater.” Sleepytime uses it as a percussive instrument and a zany stage prop, along with a bicycle wheel, a kitchen sink, and other found objects.

“Bands like Einstürzende Neubauten — just the number of different things they would make into instruments is inspiring,” Rathbun says. “I realized pretty quickly that one of the most direct ways to have a unique, original sound is to play instruments no one else is playing.”

Frykdahl admits that it’s hard for the band to stick to simple musical concepts — or traditional instrumentation — in its recordings because it has mastered so many daring feats onstage. “Our natural tendency as composers is to fill the space with notes and harmony and melody, which means not leaving room for listening to the noise,” he says. “What we often wish we could do is make beautiful, simple music with a focus on the sound itself, but we like playing notes too much to do that. It seems like the people who do that best are non-musicians who don’t really practice their instruments.”

In other words, Sleepytime isn’t just another prog band with death-metal growls and guitars; it’s an ensemble of classical musicians making high art from unconventional sources. Frykdahl is more likely to gush about modern classical greats Pierre Boulez and György Ligeti than experimental contemporaries Meshuggah and Melt-Banana — when he’s not wrapped up in fairy tales, that is.

Frykdahl, his baby daughter, and Dawn McCarthy—his wife and bandmate in psych-folk project Faun Fables — recently traveled to Idyllwild, California to take in the scenery and make a “fairy-tale rock musical” with a bunch of high-school musicians. Like The Last Human Being, it’s a tale of being left behind. It’s also the perfect story for a tiny hamlet that’s mile high in mountains.

“We arrived with the idea of doing something with the Pied Piper story, where there’s a town that’s infested with rats and the piper leads the rats away,” Frykdahl says. “When the town doesn’t pay the piper, he leads all the children away too, except for this one kid who has a bad foot. That kid doesn’t reach the mountains with the other kids, so he spends his life haunted by what he missed. So, of course, we decided to focus on him.”

The updated fable begins 30 years later than the original, with the bum-footed kid as town mayor. One day, his childhood playmates begin to reappear, as young as the day that they left. Pretty soon the village is filled with orphans, and he must decide what to do with them. According to Frykdahl, using lots of orphan characters makes for lots of acting roles, which allows all of the kids to play themselves—or wilder, more mythical versions of themselves—as they write original songs for the project.

“Right now, we’re madly finishing up parts they can sight-read on French horn and cello, and we may need to do a polyrhythms workshop,” he says, swept up in a flurry of creativity. “But hey, we get to indulge our obsession with fairy tales and mythology, which is really where it all started for us as performers—with cool stories.”