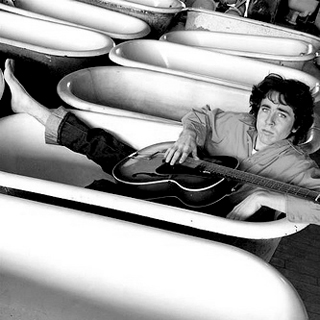 Considering how many 20-somethings still live under their parents’ roofs, it’s easy to laugh at the notion of a quarter-life crisis. However, for 23-year-old folk musician Joe Pug, existential angst is no joke. Plus, it struck before he was old enough to work it out over a beer.

“I remember sitting down for a cup of coffee and thinking, ‘I am profoundly unhappy here,'” he says of his experience at the University of North Carolina, where, until recently, he was pursuing a bachelor’s degree in playwriting. Within weeks of this realization, he made his way to Chicago, got work as a carpenter and began composing songs.

By nearly all accounts, the shift from playwriting to songwriting has been a success: Pug’s lyrics have garnered praise for getting audiences to slow down and think — really think — amidst the hyperactive multitasking that’s so difficult to avoid if you have an iPhone, a Blackberry or even a simple e-mail account. This quality stems in part from a commitment to old-fashioned, pen-and-paper songwriting techniques and a focus on human problems that are pretty timeless: greed, loneliness and the passage of time.

Pug says playwriting allowed him to explore these themes, but the medium didn’t fit his message the way he’d hoped.

“I looked at some of the plays the people around me were writing and felt that I could never write those kinds of plays. Eventually I realized that what I was doing should take a different form,” he says.

To start, Pug took an outline for a play he was writing and restructured its ideas into lyrical stories much like those that launched the careers of John Prine and Bob Dylan. He set these poems to music, added a minimalist guitar track, and an EP called Nation of Heat soon emerged.

With lyrics like “I say the more I buy, the more I’m bought / And the more I’m bought, the less I cost,” the EP quickly caught the attention of the Chicago’s roots-music community, as well as the producers of NPR’s Second Stage program, who featured his song “Hymn #101” in October.

Meanwhile, Pug’s been touring the country, opening for Rhett Miller’s East Coast gigs earlier this month and the BoDeans’ Dec. 26 show at the Barrymore.

He’s also turned an unfortunate twist of fate — a pink slip at the carpentry job — into a music-making opportunity, using his time between shows to prepare material for a new full-length album.

In fact, realizing how many people have been laid off of late, he’s decided to offer free copies of three of his songs on his website, as well as a sampler disc to those who e-mail nationofheat@gmail.com.

“It’s been great getting the word out,” he says. “I hope I can stay laid off for the rest of my life.”