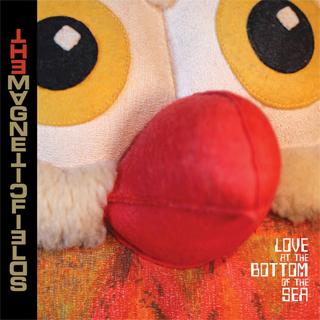 Stephin Merritt must have sonar. Whether helming The Magnetic Fields or penning songs for films and musicals, he finds depth in even the shallowest of topics and creates meaning by exploring meaninglessness. The title of his new, self-produced album, Love at the Bottom of the Sea, hints at this process as it summons daydreams about mermaids, pirates, and amorous octopi.

Synthesizers power this emotional bathysphere, recalling the sound that the band debuted on Distant Plastic Trees in 1991 and refined on 69 Love Songs in ’99. Hints of ’80s synth-pop pepper the recording as well, nodding to artists such as Gary Numan and earlier versions of the Merritt that fans know and love.

The album’s sonic textures aren’t entirely retro, however. Many of the electronic gadgets that shaped this disc didn’t exist in the ’90s, and after making three synth-less albums — i, Distortion, and Realism — the band was eager to test-drive the instruments that the past decade has spawned. The result is a vintage, back-to-the-future Magnetic Fields.