“I used to dream of a pirate ship that would take me away from here / out to the open sea, into the biggest blue / complete with a cast of unsavory crew who’d show me things that I shouldn’t do,” sings Rupa Marya, ringleader of Rupa & The April Fishes, on “Wishful Thinking,” the closing track on the band’s 2008 release, eXtraOrdinary rendition. 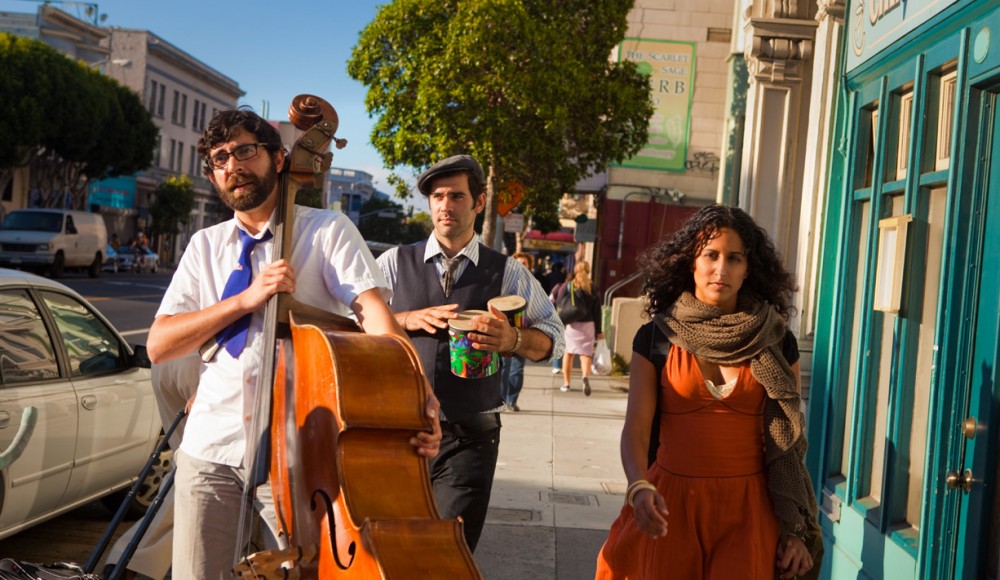 It’s a fitting manifesto for a band that incorporates all sorts of renegade performance arts — from painting demonstrations to stilt walking — into its live shows, especially in its home base of San Francisco. “We live in an amazing community of artists where someone will just call up the night before a show and say, ‘Hey, do you mind if I play my accordion on the street outside?’” Marya says. “Each show ends up being different from the next based on the cast of characters.”

It’s a formula — or lack of formula — that helps Rupa & the April Fishes’ core members tap into their juiciest layers of creativity and helps the audience lose its preconceptions of what a concert can be. “For me, [live shows] are about everyone coming together to create something beautiful and otherworldly, to take you somewhere unrecognizable and discombobulate you so you can see things from a fresh perspective again,” Marya says. “Having a bunch of pranksters around to help you do that is really helpful.”

The central set of pranksters includes trumpet, accordion, percussion, and upright bass along with Marya on guitar and lead vocals, sung in Spanish, French, Hindi, and a bit of English. Though each of the Fishes is an accomplished solo musician, they sound their mightiest as a school, shifting seamlessly from an Argentine tango to a French chanson, tied together with vocals that are part Edith Piaf, part Hope Sandoval. This sound, which the band describes as “boundary-smashing global agit-pop,” makes mincemeat out of the artificial divides that maps, languages, and political regimes create.

The Fishes succeed in this mission in part because they know how these boundaries look, smell, taste, and sound. For Marya in particular, much of this knowledge comes from growing up in the midst of cultural collision. Born to Indian parents, she divided her childhood years among California, India, and the south of France. Marya was never able to blend in, whether due to her accent, the color of her skin, or her colorful personality, but she was able to carve out an extremely strong sense of self.

“The lessons I’ve learned from practicing medicine, from the amazing people I care for and work with, cross over into what I’m trying to accomplish with music, and vice versa.”

This process of identity building propelled the group’s 2009 recording, Este Mundo, which is sung almost entirely in Spanish. “All the motion in my life has led me to have more of a sense of home than homeland; I don’t have a strong national identity, but I do have a strong self-identity, with bridges to the many different aspects of who I am,” Marya says. “So the idea of home — what it is and where it’s found — has been a major theme in the music.”

Este Mundo frames these ideas not only as political questions but spiritual ones. And unlike eXtraOrdinary rendition, which has a carnival-meets-cabaret vibe and is sung almost entirely in French, it puts a Latin American spin on this quest for meaning.

Several of the album’s songs draw inspiration from brothel-bred tangos and cumbia, a style that began as a courtship dance among Colombian slaves and evolved into a form of political protest, spreading to Panama, Peru, Mexico, El Salvador, and Argentina, where it was adopted by both slum dwellers and orchestra leaders.

On Este Mundo, these dance rhythms create a mood that’s both romantic and rebellious, fit for dinner, dancing, and a hot-and-heavy discussion about Ché Guevara. Marya likens playing the album to looking through a microscope and a telescope at the same time. “It feels broad yet focused, with more abstract elements and more details at the same time,” she says.

The key to combining these apparent contradictions lies in Marya’s “other” job as a doctor at a San Francisco hospital, where she cares for many undocumented immigrants. Marya’s found that her work as a physician has moved her to help marginalized people find not only a voice but a place to call home.

It has also helped her discover music’s power to incite social change. “I’ll be walking down the hall in the hospital, checking in on each of my patients, and I’ll have a prostitute, a CEO, a law assistant, a student, and an immigrant mother, all within a few feet of each other — something that hardly ever happens outside hospitals,” she says.

One of those wishes involves healthcare, something that many of her musician colleagues and immigrant patients lack. Marya’s quick to point out that the healthcare system, which is supposed to take care of sick people and prevent healthy people from becoming sick, should not be driven by the rules of the free market.

“People who stand to profit from others’ sickness — the insurance companies, the drug companies — shouldn’t get to decide who gets to have an important operation or an MRI or medication, and they certainly shouldn’t be in the same room where decisions about healthcare reform are being made,” she says.

“America is a very wealthy country that has many resources, but its values are out of whack. Reform has to start with some very basic questions about morals and ethics, especially concerning who gets to allocate resources.”

If power can be shifted away from profit seekers, she says, the picture would look very different — and more people might be able to pursue creative careers such as music.

It’s these “what if” questions that link her own two careers as well. Whereas “what if” can lead to an unforgettable chorus or a mind-bending jam session in music, it can lead to a diagnosis or even the cure to a deadly disease in medicine. And “what if” encapsulates the potential of both fields to improve other people’s lives through caring, dedication, and creativity.

Marya admits that most people wouldn’t attempt to be both a doctor and a full-fledged musician, but she’s made it work by challenging the flack she’s received from both professions and highlighting the common ground they share.

“Both are very much focused on compassion and trying to create something that can help people, whether it’s just expressing hope or giving someone something to hold onto in a difficult period,” she says. “The lessons I’ve learned from practicing medicine, from the amazing people I care for and work with, cross over into what I’m trying to accomplish with music, and vice versa.”

Logistically speaking, Marya’s landed a pretty sweet position that lets her spend large chunks of time away from the hospital, touring and recording. She says that this setup isn’t so much a product of luck but knowing who she is.

It’s possible, of course, that Marya’s some kind of superhuman with endless supplies of energy, patience, and passion — plus a sense of optimism bordering on lunacy. The truth is that she’s not crazy at all. Like many artists, she’s fascinated with the fate that no one can escape: death. The difference is that death motivates her rather than making her want to smoke or drink or shudder beneath a cozy pile of blankets.

“When you see a lot of people die, it gives you a very strong appreciation for life,” she says. “You know that time is going to come when you’re too sick to get out of bed, and for me this means making the most out of the time when I am alive and healthy.”

And that’s just the tip of the iceberg. “It’s also a tribute to my patients who have passed,” she explains. “That energy and hunger for life is probably the best thing I can give both my fans and my patients who are fighting to get well.”