Most bands rely on the pipes and charisma of their lead singers to tell a story. Sometimes, though, it’s the voiceless, abstract messages of our surroundings — flickering streetlamps, wrinkles on faces, magnetic fields — that have the greatest impact on our actions and memories. 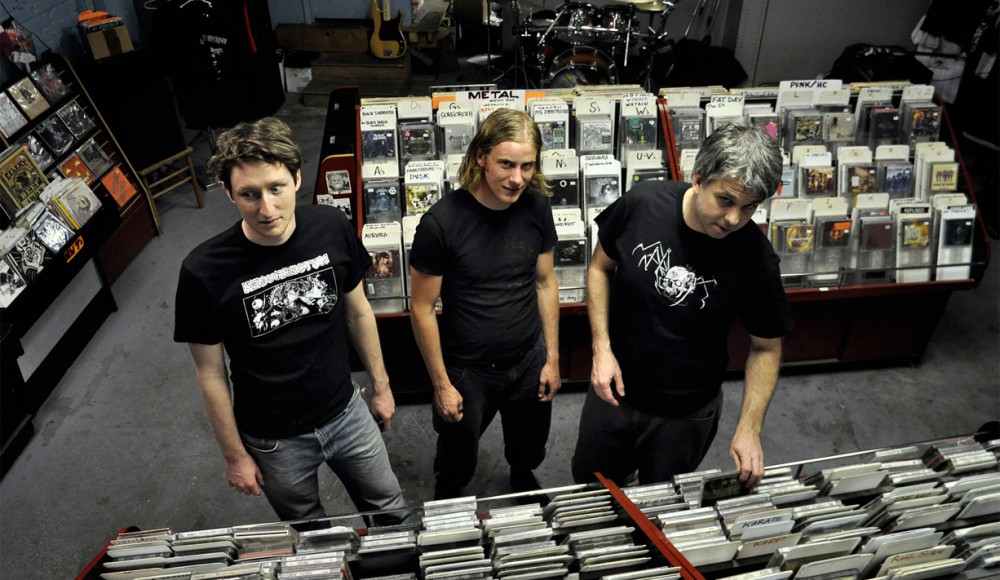 In the case of Ahleuchatistas, an instrumental avant-rock trio from Asheville, North Carolina, the band’s music, in many cases, is as stunning for what it isn’t as for what it is. Forget vocals, forget distortion, forget the whole concept of studio effects.

This is instrumental performance at its purest, captured and bottled like a cloud of frenzied fireflies. But unlike a jarful of lightning bugs, Ahleuchatistas’ sound doesn’t wilt inside its packaging. It thrives in the space between past and present that recordings generate, gaining a new layer of meaning each time it’s played.

Ahleuchatistas was started in 2003 by bassist Derek Poteat and guitarist Shane Perlowin. Poteat and Perlowin were friends from a short-lived improvisational jazz and rock group that did the club circuit in Asheville, but they had bigger ambitions for their new project. When original drummer Sean Dail was brought in, the trinity was complete.

Poteat says that Ahleuchatistas has never consciously sought to impress. “I think we’re more focused on creating mood and feeling rather than trying to blow the listener away,” he says. “There’s a big technical aspect to the music too, but it’s never technical just for the sake of being technical.”

“There are some elements of what we do that are similar to math rock, but math rock is more about riffs and repeating. What we’re trying to do, especially with the newer songs, is push the boundaries of what people would perceive to be rock ’n’ roll.”

More than anything, the music is about getting people to think. As Poteat puts it, “People really don’t think enough about things before taking them in, so we try to get them to pause and figure out what they’re hearing, what they’re consuming, before they swallow it.”

The band does this by using unexpected sounds and, more importantly, by breaking the silence at unexpected times. The resultant songs pull you in with their emotion but demand careful listening due to their complexity — and the element of surprise. They don’t just invite you to deconstruct them; they require it.

It’s tempting to call Ahleuchatistas’ sound math rock due to its complex rhythms and technical precision and because, like calculus, it can require some cerebral calisthenics to fully comprehend. “There are some elements of what we do that are similar to math rock, but math rock is more about riffs and repeating,” Poteat says. “What we’re trying to do, especially with the newer songs, is push the boundaries of what people would perceive to be rock ’n’ roll.”

For Ahleuchatistas, this self-exploration has involved burrowing into the nooks of jazz and the crannies of avant-garde classical compositions, such as those of John Zorn. Poteat and Perlowin have been listening to Zorn’s music for longer than they’ve been playing together. What they didn’t know was that Zorn was listening to their songs too.

Two years ago, when the band was trying to re-release its second album, Perlowin sent some tracks to Zorn on a whim. A few weeks later, Zorn was on the phone, expressing his admiration for the band’s work and volunteering to put out the disc on his own label, Tzadik. Things were quiet on the Zorn front as Ahleuchatistas toured and wrote new material in 2009, but once it composed enough songs for an album, there Zorn was again, volunteering to record them.

It all has felt a bit strange, Poteat admits, because each of these collaborations has happened over the phone or in cyberspace. “People will ask what he’s like, and I’m always saying, ‘He seems like this really nice guy, but I don’t really know him,’” Poteat says. “I know I really like his work and how he handled the production of our work, but he’s still sort of a mystery to us.”

A similar sort of mystery shaped the group’s recent search for a new drummer. Before Ryan Oslance joined Ahleuchatistas’ ranks in 2008, the band notified its MySpace friends that it was looking for a new member, a move that’s typical of a band just finding its bearings but unusual for one with an established fan base and a sound that requires some serious talent to create.

“We parted ways with [Dail] and had five weeks until our next tour, so we were trying to think of ways to find somebody good pretty fast,” Poteat says. “A lot of people replied and said, ‘You’re kidding, right?’ But then we got these audio tracks from Ryan, he flew down from Chicago, and it came together like puzzle pieces.”

Since adding Oslance to the lineup, the band has veered away from the overtly political messages of earlier albums, which included tracks called “Al Jazeera,” “Post-Colonial Nausea,” and “Remember Rumsfeld at Abu Ghraib.” The tracks on its new album, Of the Body Prone, released in September of 2009, tackle similar topics but with oblique, sometimes humorous titles.

“Dancing with the Stars” starts with spacey guitar transmissions and wiggly bass lines that sound like muted alien conversations. Swiftly shifting time signatures create a sense of being drawn off course by a very strong magnet. When drums burst into the song, it’s as if you’ve been sucked into the wormhole.

Meanwhile, on “Why Can’t We Be in Jamaica?”, a solo of percussive popcorn gives way to a drum-and-bass duet that begins in perfect unison, then unravels into an explosive juggling act in which fiery drum beats, bass barbs, and bombshells of guitar somersault and ricochet off one another.

Watching this chaos unfold slowly, carefully controlled by the musicians, is perhaps even more exciting — and shocking — than seeing it self-destruct at warp speed. Not only is this level of control difficult to pull off, but it reveals the details and precision that go into creating anarchy, building anticipation in the process.

Though a marketing executive might call it mood music for the post-9/11 era, for Ahleuchatistas, Of the Body Prone is more of a psychology experiment, one that ventures into the realm of mad science.

“We really tried to say, ‘Let’s work within these parameters and see what we come up with,’ and do things like adjust the timbre of the song to see how it affects listeners’ emotions,” Poteat says. “We’re not just using the changes between the parts of the song to do that anymore, so I think the album shows how much our songwriting has progressed.”

Poteat also hopes that artistic progress will sow the seeds of social progress — or at least a bit more social criticism. Whether this happens isn’t up to the band, however, but through the listeners’ ears and lovely, languishing brains.