In October 1992, nearly 1,000 music fans were arrested at a rave in Milwaukee’s Third Ward, sparking a controversy about electronic dance music and its purported influence on young people. In those days, DJs spun records imported from Europe as crowds in warehouses danced until sunrise, glow sticks raised.

After the raid, promotional word about raves spread quietly. Flyers led to a hotline number, then a recorded message, then a secret meeting spot, where you’d get a map to a far-flung barn or campsite. The stealth gave the movement a thrilling quality. But as the media hyped the dangers — designer drugs and fire hazards — musical trends changed, sending EDM deep into the underground.

Twenty years later, you can still attend a “rave” in Wisconsin, but it will be easy to find. A promoter will tweet about it, and it will take place at a public venue like the Alliant Energy Center, where on April 13, the electronic artist Bassnectar will crank out party bangers and inventive remixes of tunes by dance-pop darling Ellie Goulding and gypsy punks Gogol Bordello.

Many of the genre’s visual elements are the same as they were in the 1990s, but they’re bigger and brighter, with laser lights, fog and projected images that make mouths gape as thousands of bodies writhe to the rhythms of dubstep, electro house and other varieties of EDM. If you go to the Bassnectar show, look for a crowd writhing ecstatically in a stew of bleeps and bloops, waving their hands amid a miasma of confetti.

EDM’s popularity is booming. After performing mash-ups at UW-Madison’s student union five years ago, Girl Talk now fills the Alliant Energy Center’s 6,000-capacity Exhibition Hall. Bassnectar will likely do the same. He played the tiny King Club in 2007 and the Majestic Theatre in 2009.

Some fans who’ve experienced both rave scenes swear they’re similar. Matt Fanale, a local music fan who DJs under the name Eurotic, says a new generation of concertgoers wants to dress in neon and dance till dawn. To him, this is evidence that music trends come in 20-year cycles, and that the motivation to party is the same as it ever was.

“At rock shows, you’re singing and screaming along, but you’re not necessarily dancing,” he says. “With a DJ, you don’t have to watch what’s onstage. You can pay more attention to the other people who are there and feel a real connection to them for a few hours.”

Fanale suspects that the sluggish economy has fueled attendance at live electronic shows. “With the world as depressing as it has been lately, people want to lose themselves with thousands of others. It’s more fun to be happy than angry,” he says.

The paradoxically isolating nature of social media also plays a role, according to DJ Nick Nice, who helped launch the Midwest rave scene in the early 1990s after spinning records at Queen, a Paris club where David Guetta curated the music. “Facebook is such a solitary experience. It’s basic human nature to want to be social, and listening to music with thousands of other people reminds you that you’re not alone, even when the world seems to be falling apart,” he says.

Though these concerts can draw huge crowds and kindle a sense of connection, they can also create rifts. Madison resident Vinnie Toma loves to DJ. He’s built a career around it since 1998. But when he thinks about nuevo-raves, his heart sinks. Though many who attend these shows crave connection, this quest, for some, spirals into escapism.

“In this country, during times of economic downturn, you see the younger generation turn to music that’s a little less thoughtful,” he says. “Kids who are in college right now, or even several years out, there aren’t as many opportunities, and they’ve racked up tons of school debt. It can fuel a lifestyle that’s all about partying and pushing [difficult] emotions away.”

Local DJ Wyatt Agard says these big shows sometimes don’t feel like raves at all. In the early days, raves revolved around ideals like unity and respect. Partygoers hoped to find themselves as they swam through rooms of trance, house and techno — or at least that’s how they remember it.

“A lot of the [current] shows feel like concerts, not parties,” he says. “At raves, not everyone faced forward. There was this cyclical feeling as people moved around the room. Many of the shows now, people face forward, toward a stage, and stay put for hours.”

In other words, people tend to surround themselves with friends rather than explore. That can lend a rock vibe to events, especially at shows that incorporate rock sounds. “The Rusko show at the Orpheum [on Feb. 25] was a lot like a rock concert,” Agard says. “People were moving on beat but not dancing, and if you examine the music theory behind it, dubstep looks a lot like rock, except with electronic instruments.”

Despite EDM’s popularity, it didn’t gain much mainstream acceptance in the 1990s. Its sounds filtered into the public consciousness from underground. Nowadays, though, its key elements — synths, samples, sequencers — drive songs by Top 40 artists like Lady Gaga, Rihanna and Ke$ha, as Jay-Z raps atop Daft Punk tracks.

Daft Punk’s influence can’t be understated. The French duo, whose songs include “One More Time” and “Harder, Better, Faster, Stronger,” have transformed disco beats into music that sounds thoroughly modern, and their music can be found in the soundtrack to Tron: Legacy, videogames like Just Dance 3 and nearly every corner of the web. The group played one of their first live performances at a Wisconsin rave in 1994, notes Chris Vrakas, a Milwaukee-based DJ and event coordinator for Chicago-based concert promoter React Presents.

Daft Punk also proved that live EDM could be more than a DJ spinning records or tickling a computer keyboard. The group donned space-ready helmets on their 1997 tour, which spurred other EDM artists to bust out the theatrics. Glitch-hop act Pretty Lights crafts visual spectacles incorporating colorful lights and 3-D images, and Deadmau5 has designed his own whimsical headgear with the help of Jim Henson’s Creature Shop. 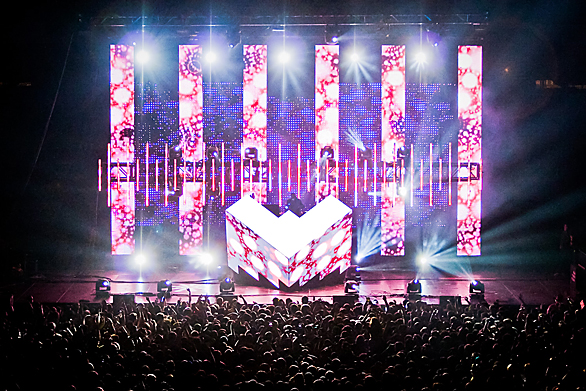 “He blew me away, and I’ve seen hundreds of concerts: Paul Oakenfold, the Chemical Brothers, you name it,” Parks says. “It was a multi-sensory experience, where the visual aspect worked in tandem with the sound. The cube he was sitting in would broadcast these 3-D images on the walls, more and more of them as the night went on. Pretty soon, they were popping up everywhere and reflecting off his mask as they pulsed along with the beat.”

These abstract effects attract various kinds of fans, from music-loving Gen X-ers like Parks to kids barely old enough to drive. The under-30 set tends to dominate, though. According to UW-Madison seniors Azaria Posik and TJ Matzen, who book, blog and promote for Wisconsin Union Directorate’s music committee, EDM’s popularity among college students relates to the scene’s inclusiveness. There’s no need to memorize lyrics or wow others with band trivia, which makes it easy to invite large groups of friends to the show.

“My girlfriend and her roommate, if they hear that an act is good to dance to, they’ll go to the show in a big group,” Matzen says. “The electronic scene is more welcoming and more about letting loose than the indie rock scene.”

DJ and promoter Agard says live EDM’s popularity stems from booking decisions clubs made to weather the recession. “The downfall of the economy made it expensive to book bands, so clubs started booking more DJs because DJs have a higher draw per dollar spent,” he says.

Some club owners got acquainted with EDM artists at festivals like Bonnaroo and 10,000 Lakes. “Artists like Bassnectar performed at these festivals back in 2005 or 2006, but they weren’t headlining then,” Agard explains. “They were playing the afterparties, which is how a lot of promoters got hooked on them — and trends like dubstep.”

Take Majestic Theatre co-owner Matt Gerding. Despite being a rock enthusiast, he couldn’t help but notice that Deadmau5 and Bassnectar were climbing the ranks at Lollapalooza.

Now Gerding books many of the area’s big EDM shows, including 18-and-up performances at the Orpheum and the Alliant. Riding the EDM wave has been exciting, he says, because it’s uncharted territory for the Majestic team. Booking the shows has meant making some potentially costly decisions about bumping acts like Deadmau5 and Bassnectar to the Alliant.

“Moving a show to a larger venue, that’s a decision made mostly by the artist’s agent, manager or record label, when tickets are moving at a speedy clip,” he says.

The risk has paid off, and several EDM artists now visit Madison twice a year rather than once. This is good news for venue owners, but it can mean slow nights for local performers who draw some of the same crowd.

Still, fans miss out when they trade local events for the lasers and costumes of touring acts, according to local DJ Josh Landowski, a.k.a. Landology. It is, he notes, impossible for an artist to tailor a set to a crowd of thousands. “At somewhere like the Alliant, you know your set ahead of time,” he says. “You’re feeding off the crowd’s energy, but it’s more about you than them. You almost have to be over-the-top, so people will pay to see you again.”

So fans seeking to lose themselves in a sea of revelers can go to one of the giant arena dance parties. But they should hit up a local event for some personal attention. If you’re a DJ playing a club or restaurant around town, says Landowski, “you focus on even the smallest reactions from the crowd.”