Tuva is a Siberian republic surrounded by two majestic mountain ranges and peppered with tiny deserts, lush valleys, and more than 9,000 rivers. Population-wise, it’s about the size of Iceland and shares a similar history of being isolated from much of the world for thousands of years due to its location and chilly temperatures. Music-wise, it’s one of the most amazing places you’re likely to discover.

Much like the home of Björk and Sigur Rós, Tuva is immersed in a musical tradition that’s deeper than its permafrost. This tradition revolves around throat singing, an art form in which multiple voices seem to spring from one vocalist thanks to the magic of harmonics and overtones.

Scientifically speaking, a singer can amplify different parts of a sound wave by changing the shape of various cavities of the mouth, voice box, and throat, allowing sounds that are subdued in most vocal performances to take center-stage. The result is a sound that’s been described as a “one-man quartet” and even a “bullfrog swallowing a whistle,” as the 1999 documentary film Genghis Blues puts it.

The Alash ensemble, a quartet composed of Bady-Dorzhu Ondar, Ayan-ool Sam, Ayan Shirizhik, and Nachyn Choodu — four twenty-somethings trained in this ancient art by their parents, grandparents, and a healthy dose of intuition — serves as Tuva’s musical ambassador to the United States. 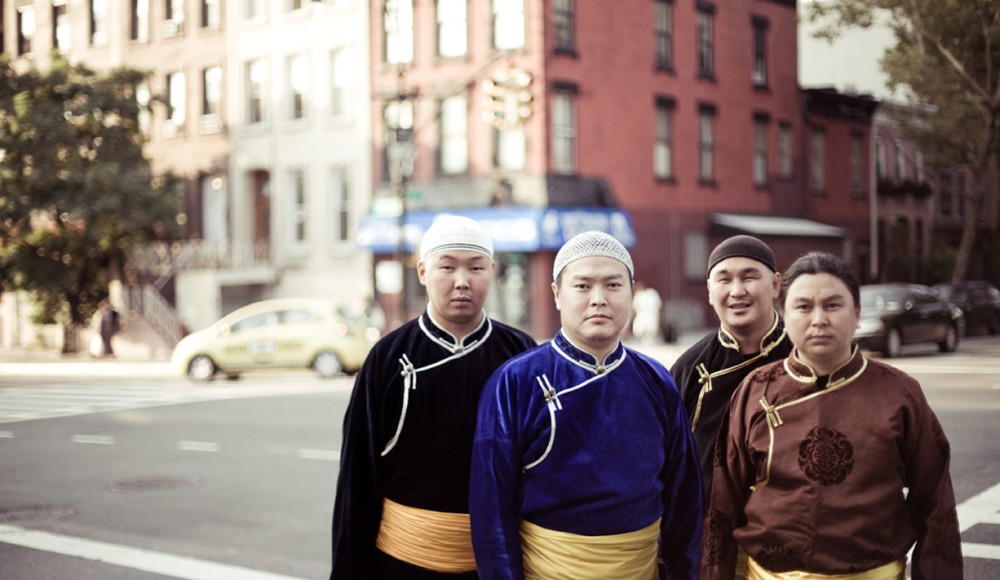 “Things like Jimi Hendrix and the [Sun Ra] Arkestra are slowly but surely having an effect on our music; it’s not so much about directly mixing these artists’ sounds with throat singing but how it affects the way their music feels.”

Over the past three years, the group has performed with the Sun Ra Arkestra, recorded a Christmas album (Jingle All The Way) with Béla Fleck and the Flecktones, and introduced numerous students to a style of music that sounds like a mix between Tom Waits and a flock of swallows.

The band’s flagship song, “Alash,” with its bouncy melody, could be a tune from the Appalachian Mountains or the hills of Ireland. At other times, the group’s sound is more abstract, reminiscent of distant trains, or the yip-yipping martians from Sesame Street.

The music inspires comparisons to nature and the great beyond. Alash is named after one of the most majestic rivers in Tuva, symbolizing the band’s connection to the water from which its ancestors drank thousands of years ago. And just like the movement of water from clouds to streams to lips and back again, Tuvan songs pass from the spirits of nature to the souls of humans, released back into nature via the lips of throat singers.

Though many of Alash’s melodies have cycled through Tuva for centuries, the way the group presents them to the cosmos is very new.

“Things like Jimi Hendrix and the [Sun Ra] Arkestra are slowly but surely having an effect on our music; it’s not so much about directly mixing these artists’ sounds with throat singing, but how it affects the way their music feels,” the band says, via manager and translator Sean Quirk. “We have a new song about reindeer herding. Even though the piece focuses on this practice that’s very much about Tuva, you can sense these other influences if you’re listening closely.”

This is a huge breakthrough for a musical tradition that still considers stringed and woodwind instruments new additions. These instruments include the igil, a two-stringed instrument that’s played like a cello; the doshpuluur, a three-stringed instrument that’s plucked or strummed like a banjo; the byzaanchy, which has four strings that represent the udders of a cow and are “milked” to create a sound; the chadagan, which resembles a zither or a koto; a jaw harp known as a xomus; the murgu and limpi, two types of flutes; and a large drum called a kengirge, which often comes with a set of reindeer bells.

Alash uses all of these instruments and a few others to create a sound that’s lush and layered, with rhythms that duel one moment and collaborate the next. And unlike most bands, Alash will even teach you how to play the instruments — as well as how to build a yurt and cook up some Tuvan snacks — at its concerts, if you have the time and the money. It’s all part of an effort to welcome people from other cultures — especially Americans — into the fold.

“The touring is all about creating a good impression of Tuva and conveying something about the lives of people who live there,” Quirk says, “and maybe attracting a few visitors. Tuva loves guests.”

It’s also a way of bringing bits of the West back to Tuva, which still shows relatively few signs of capitalism. Though many Tuvans descended from nomadic tribes, they are not immune to pangs of homesickness.

When traveling the roads of Texas and Oklahoma, the lonesome cowboy is one American figure Alash can relate to, but not for his cigarettes. It’s because he also feels incomplete without his trusty steed. To keep spirits high, the band adopted a wrangler look — ten-gallon hats and all — when traveling through Texas, stopping in Fort Worth to ride a mechanical bull and visit some friends with a horse ranch.

“Like many people from Tuva, they feel most at home when riding their horses,” Quirk says.